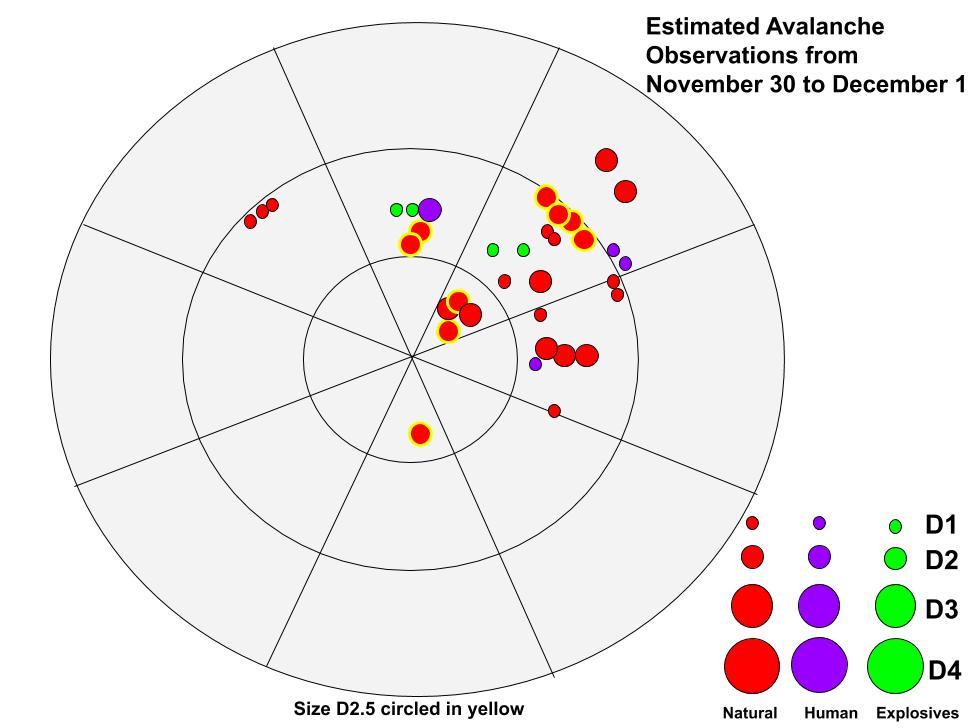 skier triggered wet slab, R1 D2. triggered near a small group of pine trees: one skier caught and carried a couple of feet, no burials.

Snowpack: overnight freeze thawed on the way up, wasn’t quite soft enough for postholing at the summit. Once we dropped into the bowl, the snow quality degraded into slush. Sluff was easily manageable.

Weather: Well, it was a good summer. I mean we had that week of temperatures in the 50’sF so I guess that is it as it is winter. Again. Off and on snow yesterday but steady last night moderate to heavy with the 24 hour totals of 14½” of new snow and water content of 1.25″. Snowpack, which just a few days ago dropped to 40½” is now at 59″. Light SW wind and no visibility and currently snowing moderately. And if you do not have anything nice to say about something…..

Weather: Snow most of yesterday but generally light and very dense, then picked up after dark until around midnight when it became light, then none. Also some rain for a bit mid afternoon. The 24 hour totals are 10″ of snow with water content of 1.19″ and rain 0.05″. Snow feels even denser than that 12%, which in itself is almost twice the usual density. Snowpack back up to 48½”, up from 40½” 2 days ago. Snow is wet and sticky and is caked to everything. Currently overcast and at the days low of 30F. No wind yesterday or now though it did pick up a while last night.

Avalanches: A couple more cornice avalanches that failed within the past couple days. The most significant was outside our forecast area in the West Elk Wilderness. The cornice gouged to the ground and produced a very large D3 avalanche on a north face at 12,200ft. The other was a D2 on an east face at 12,000ft near East Beckwith that only entrained surface snow.

Weather: Oooo man, that was a good one! Beautiful day. Calm to light winds at 12,000ft. Clear sky. Full on spring baby.

Snowpack: Shred-tastic out there. Spent most of the day on northerly facing terrain. The snow surface above 11,500ft was still mostly dry and great skiing where it wasn’t effected by the wind. Spent some time crossing easterly facing terrain near and above treeline and before noon, and any loose wet issues where minimal at that time. SW above treeline at around 1pm was warming right at ridgeline, didn’t travel lower on that slope but the loose wet also felt minimal. Wether loose wet avalanches became a more significant issue somewhere or not, we still chose to avoid some sunny terrain due to the potential for wet avalanches on rocky steep slopes. 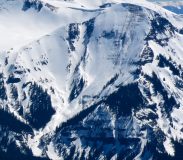 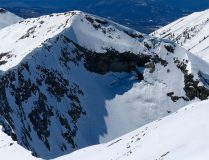 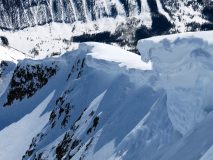 Avalanches: A few old previously reported Wind Slabs, numerous D1 and D1.5 wet loose from Sunday or Monday on sunny slopes near and above treeline. Of note though were 4 good sized cornice failures, that had little to no refill from this past weekends storm, which makes me believe that they likely failed on Monday from warm temps with clear, sunny skies – see photos

Weather: Cloud cover varied from partly to mostly cloudy during the day with moderate amounts of solar warming the snow. Winds were generally light with occasional moderate gusting above treeline blowing from the NW. A few thicker clouds spit out a few snowflakes but not enough to call it a dusting. Air temps were fairly mild pushing close to freezing mark at treeline.

Snowpack: Very little dry snow remains – above treeline due north. Terrain that faced due north at about 11,700ish feet had a thin temperature crust at the surface – exciting breaker crust skiing. Slopes that face NE above treeline up to 12,300′ became moist down to the 4/12 interface and produced small roller balls around noon – tried to get a wet loose slough on this terrain but conditions were not quite wet enough. Did not travel through much southerly above treeline terrain.

Skied through SSW near and below treeline terrain around 3pm and found around 4 inches of wet snow sitting on top of a supportive, still frozen crust. Was able to get a few roller balls going on this terrain, but no wet loose avalanches. It sure feels like we need a prolonged or dramatic warm up to get significant wet loose activity going again – feeling very spring-like on sunny slopes even in the afternoon with decent solar input. 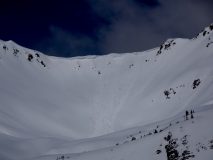 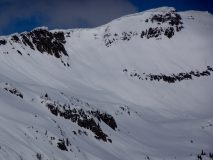 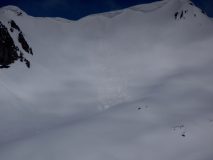 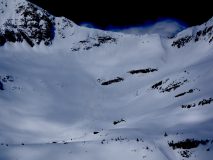 Nothing new. Some wet loose avalanches on S and E aspects at all elevations from warm temps and sun on Monday, and a few old Wind Slabs from the past weekend in alpine terrain down the spine of the Ruby Range on easterly aspects.

Weather: Mostly cloudy skies but with periods of sunshine. Warm temps, above freezing at 11,500′ around 230pm. A few random flurries, with a snow shower earlier in the day leaving a trace of new snow. Light winds out of the SSW with some gusts.

Wandered around a bit checking a variety of aspects in the snow favored portion of the forecast area to observe wet surfaces and how deeply water has drained into the snowpack so far this spring.

Starting below treeline dug a couple of holes below 10,500′ on south and southeast aspects with HS between 120 and 140 and found 10cm wet surface snow, but a few cms of old crust still frozen. Water had drained to the ground on these sunny below treeline slopes.

At the near treeline elevation band found around 5 inches of wet snow from the previous weekend sitting on a supportive crust on an ENE facing slope. Free water had percolated down 55cm from the surface forming an ice lens with percolation tubes going a few cms beyond. HS on this slope was close to 300cm.
An easterly facing slope at 11,200′ with an HS of 260cm showed free water had percolated around 115cm down from the surfaces forming several ice lens’.
A northwest facing slope at 11,500, HS 200cm, had free water drain down around 25cm from the surface. While probing, basal weak layers felt noticeably weaker than the stout slab above. While probing the ENE and E facing slopes, that have significantly deeper snow depths, basal weak layers felt much stronger and were less noticeable while probing.

Snow surfaces looked to have been just wet enough, near and below treeline, to trigger some small wet loose avalanches, but all locations had crusts below the wet surface which would have prevented wet loose activity from gouging much deeper into the snowpack.

There were plenty of natural and human triggered Wind Slabs from Sunday that where still visible. These mostly appeared to have thin crowns in the 4-5″ range, but some where in the 12″ range. They had some good propagation up to a couple hundred feet and had the potential to take you for a ride.

Saw 4, D2 Cornices that had released in the Rudy Range. One of which was observed on April 9th, while the others looked more recent.

Weather: Partly Cloudy as a general summary of the whole day. Moderate to strong westerly winds.

Snowpack: Any new snow that has accumulated over the last few days was definitely getting zapped down at the elevations traveled. Up at the lower benches of the Ruby Range above Irwin, recent snow had settled out to ~6″ on last Fridays Crust 4/12. At lower elevations there was closer to 0-2″ of snow sitting on that crust. Any current avalanche problems where related to this new snow. Despite the few clouds and strong winds, loose wet avalanches could be human triggered in this transitioning snow. This problem would have been easy to manage and I saw little natural activity. Checked a couple lower elevation sunny slopes on the way home in the afternoon. Those particular slopes were still supportive to a snowmobile and crusts had not fully broken down so there wasn’t really a loose wet avalanche problem.

In regard to the Wind Slab issue. I traveled on similar slopes as those that had produced Wind Slab Avalanches yesterday. Those slabs no longer appeared problematic and where transitioning into the Loose Wet problem. Maybe this issue would have still been problematic near or above 12,000ft say, where the snow was colder. 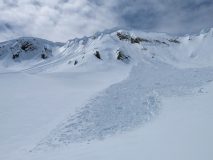 Example of a Cornices that have fallen 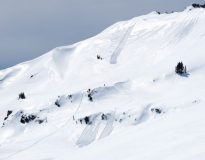 Typical size of the current Loose Wet Avalanche problem in the Ruby Range above Irwin.

Avalanches: Fresh, natural wind slab avalanche that ran earlier in the morning on a noticeably wind loaded SE aspect of Ruby. One skier triggered avalanche on a cross-loaded E-SE slope, big enough to carry a person.

Snowpack: 6-12″ of fresh on top of a supportive base. New snow turning stiff below 11,500 in places affected by wind.